The cryptocurrency market has enjoyed a little uplift as the week draws to a close. Its total cap has risen to $1 trillion again, a jump of 4%. Bitcoin, ethereum and other big coins have led this charge, while a handful of smaller altcoins have posted nearly double-digit gains. Assuming that this momentum will continue for the next few days, this article chooses 5 cryptocurrency to buy for a price boom this weekend.

5 Cryptocurrency to Buy for Price Boom This Weekend

LBLOCK is down by 90% from its all-time high of $0.00974554, set in February. However, it has begun a process which should enable it to rally once market conditions become more positive.

For one, its native platform Lucky Block began conducting regular prize draws at the end of May, awarding $1 million to two winners. On top of this, Lucky Block has passed the necessary audit for its upcoming ERC-20 token. This will mean it will open a bridge to Ethereum in the near future. It will also expand its liquidity significantly, by paving the way for more centralised exchange listings.

Why have we created the V2 version of our #token? 🤔

After talking to #CEXs we realised that there’s a need for #ERC20 version of the token to ensure about the future listings! ✅

Given these developments, there’s a real chance LBLOCK will recover lost ground in the future. This is why it’s one of our 5 cryptocurrency to buy for a price boom this weekend. 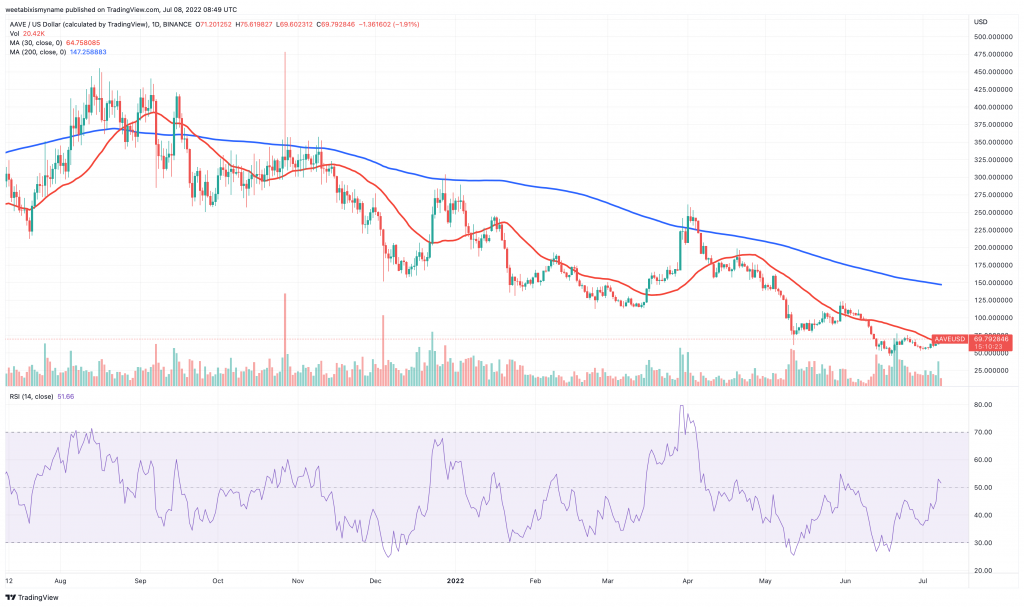 AAVE’s indicators have crossed an important threshold. Its relative strength index (in purple) has risen above 50, signalling the beginnings of a possible rally. Its 30-day moving average (in red) has begun climbing towards its 200-day average (in blue), which again suggests the start of some kind for recovery.

The native token of DeFi platform Aave, AAVE is rising largely because of developments concerning the latter. In particular, it issued plans yesterday to launch its own stablecoin, known as GHO. This will be collateral-backed and pegged to the US dollar, and would work in a way not too dissimilar from DAI. In other words, it will be a decentralised algorithmic stablecoin.

We have created an ARC for a new decentralized, collateral-backed stablecoin, native to the Aave ecosystem, known as GHO.

Read more below and discuss your thoughts for the snapshot (coming soon)!👇https://t.co/P7tHl9LbBe

More generally, it’s worth pointing out that Aave is the second-biggest DeFi platform in the ecosystem, according to DeFilLlama. Based on the Ethereum blockchain, it accounts for $6.68 billion in total value locked in, most of which comprises funds deposited for lending. And with the launch of its own native stablecoin, this figure could rise significantly in the coming months. 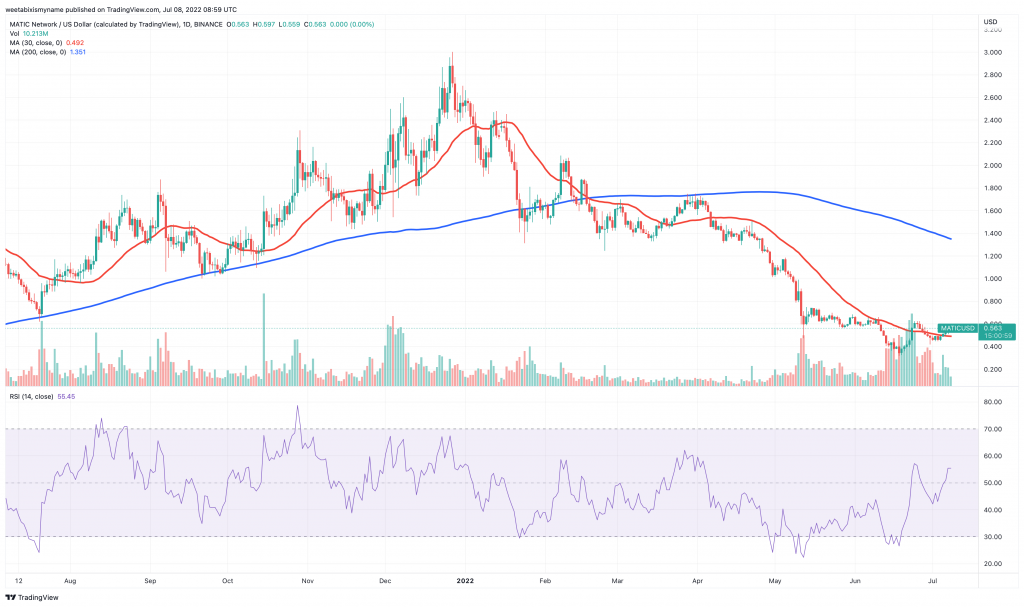 MATIC’s indicators suggest that it’s one of the strongest coins in the top-100 right now. Its RSI is nearing 60, while its 30-day average has plateaued, suggesting a recovery.

MATIC has been gaining momentum in the past few weeks because of a number of important announcements and partnerships. Most recently, it announced the launch of a testnet for Polygon Avail. This is an additional network which will enable Ethereum to store much of its transaction data off-chain, thereby reducing costs even further. It’s targeted primarily at the growing Web3 market, meaning that Polygon could become increasingly important to the latter.

Avail takes a bold step towards a modular future, where chains specialize and work together for a much more scalable #Web3.

Another big piece of bullish news for Polygon was that Coinbase selected the layer-two scaling platform as its network for sending transfers of ETH and USDC (as well as MATIC). Given the strong competition within the layer-two ecosystem, Coinbase’s selection of Polygon is a big endorsement for the network. Combined with a total value locked in of $1.64 billion, it’s easy to see why MATIC is one of our 5 cryptocurrency to buy for a price boom this weekend.

We’re making it faster, easier, and cheaper to access web3: over the next month, eligible Coinbase customers will be able to send and receive ETH, MATIC, and USDC on @0xPolygon and USDC on @solana.https://t.co/vVLnk1DTZ2 pic.twitter.com/j93F4rKd6C 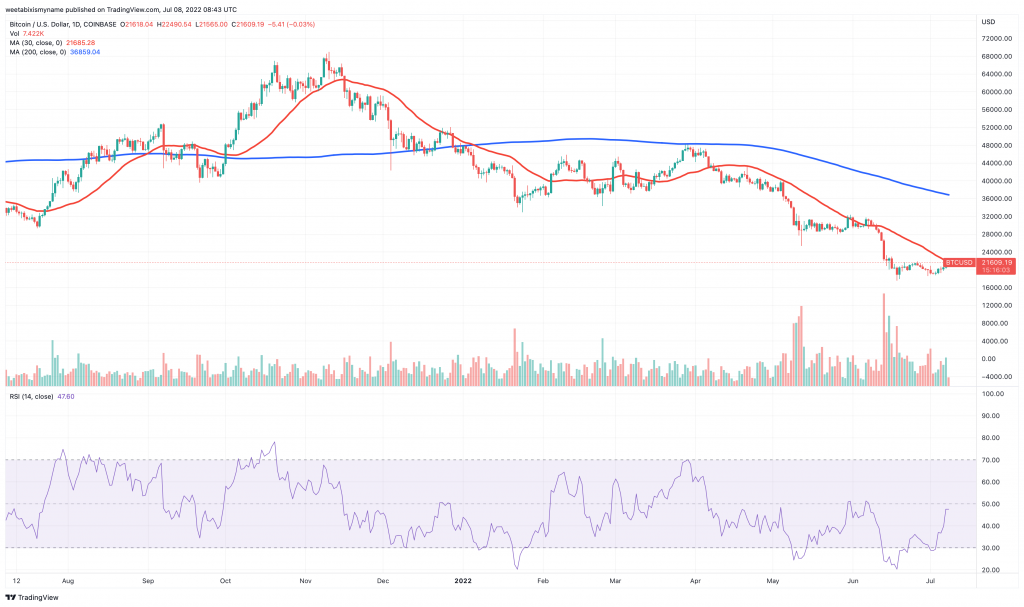 BTC’s indicators show a rekindling of momentum. Its RSI has risen from 30 to almost 50 in the past few days. Meanwhile, the fact that its 30-day average has fallen so low below its 200-day average suggests it may have hit a bottom.

As we’ve pointed out before, pretty much every available suggests a market bottom. This includes the stock-to-flow and realised price indicators. The thing is, the global economy is living through a period of unprecedented strain, with another recessions now looking like a real prospect. So the indicators could remain at a bottom for a while yet.

Nonetheless, BTC is the best-placed cryptocurrency to surge at some point in the future. As with previous bull markets, it will lead any future bull market. It continues to attract more institutional investment than any other coin, as well as attract more ownership in countries with severe inflation problems. This is why it’s one of our 5 cryptocurrency to buy for a price boom this weekend. 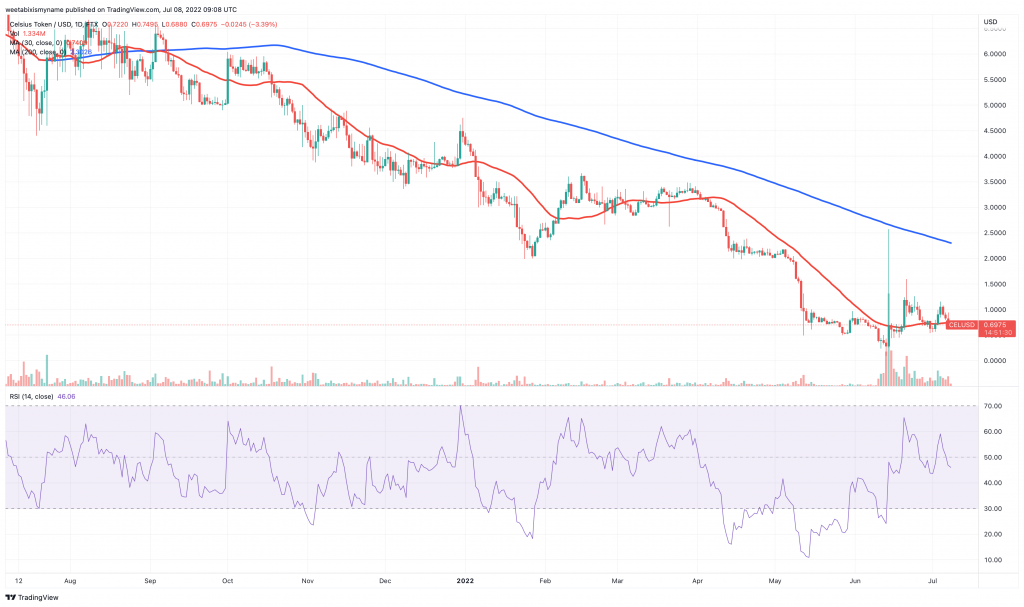 CEL has been through an extremely turbulent period, beginning when the Celsius Network halted all withdrawals. This tanked the price of CEL, yet at the same time it created an opportunity for a big rebound, which is what the market has seen in dribs and drabs.

The price of CEL has fallen again largely in response to a former Celsius asset manager filing a lawsuit against the company. He alleges that it was basically a Ponzi scheme, and that it used customer deposits to pump the price of CEL.

Needless to say, such accusations are very damning if true. On the other hand, the cryptocurrency market has a tendency to disregard ethics and propriety when it comes to selecting coins, and given that CEL has fallen so hard, the altcoin may rebound again. Its case is also helped by the fact that Celsius has paid off the outstanding loan it had on Maker, which had previously threatened the company with collapse.

💥BREAKING: Celsius has now paid off its loan on Maker.

Gemini Offers Staking in Lead Up to ETH Merge