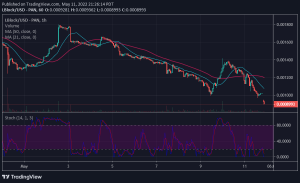 The LBlock price eased after the market declined to a low of $0.00100 on May 9. The bulls defended the current support as price rebounded to the previous highs. Buyers pushed the coin above the moving averages as it resumed upward correction. However, the upward correction was interrupted at the $0.001400 high. The bears sold at the recent high. LBLOCK/USD would have regained bullish momentum if the uptrend is sustained above the moving averages. Nonetheless, the bears pushed the coin to the previous low at $0.001000. Lucky block is likely to be compelled to a range-bound move between $0.001000 and $0.001400 price levels if the current support holds. Conversely, the downtrend will resume if the $0.001000 support is breached.

LBlock has continued to decline as it faces rejection at $0.001400. The market has declined to $0.0008049 low as of press time. The coin is below the 20% range of the daily stochastic. It implies the Lucky block is trading in the oversold region. In the oversold region, buyers are expected to emerge to push prices upward. On the upside, if buyers clear the $0.001400 high, the market will resume upside momentum.

Ethereum Dives 15%, Why Close Below $2K Is The Key